You are here: Home > Things to Do > What's On > Special Event > Trooping the Colour
Watch troops from the Household Division honour the monarch's official birthday with Trooping the Colour, a fantastic military parade that has taken place in London for two centuries.

Experience a traditional ceremony full of military pomp and pageantry with Trooping the Colour on Horse Guards Parade.

Marking the sovereigns's official birthday, this annual event features hundreds of officers, horses and musicians from the Household Division in ceremonial uniform.

With events starting at 10am, the parade begins at Buckingham Palace and travels along The Mall to Horse Guards Parade. There, the monarch carries out an inspection of the troops, before leading the guards in a parade back to Buckingham Palace. Once at the palace, the monarch takes the salute and guns are fired in Green Park and at the Tower of London. Finally, they join other members of the Royal Family on the palace balcony to watch the Royal Air Force flypast at 1pm.

What is Trooping the Colour?

After existing in various forms since the 17th century, the Trooping the Colour ceremony has been held every year in London to mark the sovereign's official birthday since the accession of King George IV in 1820, except during the world wars and a national strike in 1955.

Monarchs are traditionally given a second birthday if they were not born in the summer, in case the British weather is unsuitable for an outdoor event! 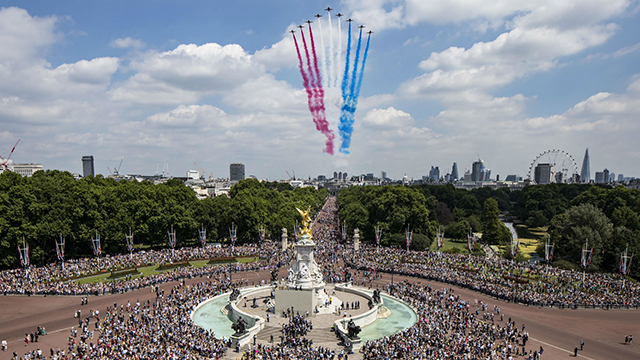 How to get Trooping the Colour tickets

Tickets for the seated stands on Horse Guards Parade are usually available to the public via an online ballot.

Where to watch Trooping the Colour

Alternatively, tickets are available for the rehearsal events held on the two Saturdays before Trooping the Colour: the Major General's Review and the Duke of Cambridge's Review. You can also get tickets to the Household Division's military evening pageant Beating Retreat, which takes place in the same location on the Wednesday and Thursday preceding Trooping the Colour.

The parade is broadcast live on the BBC on the day.

Seated tickets for the Trooping the Colour ceremony are allocated by ballot with a maximum of four tickets per applicant.

You can also watch some of the event for free by standing along The Mall or on the edge of St James's Park overlooking Horse Guards Parade from 9am.

Events start at 10am.

Hotels near Trooping the Colour