Join London’s biggest street party, as the streets of west London are filled with Caribbean colours, music and flavours during Notting Hill Carnival.

Watch elaborate floats and costumed performers wind their way through the streets in the carnival parade, dance to the sound of steel bands and calypso music, and visit the tempting food stalls along the route.

What is Notting Hill Carnival? 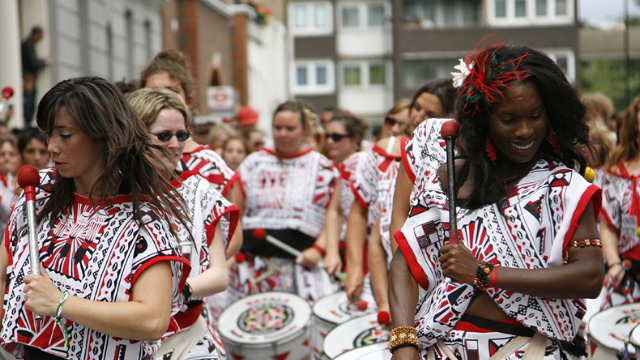 Notting Hill Carnival was first held in 1966. It celebrates the rich history of Caribbean culture in London.

The first Notting Hill Carnival attracted around 500 people. The carnival has since grown to become the largest street festival in Europe, attracting hundreds of thousands to London. You can usually expect to see some 50,000 performers in the parade and more than 30 sound systems, with more than one million people attending over the weekend.

If you're planning to go to the carnival, find where to stay near the celebrations, check out Caribbean restaurants to refuel at afterwards and download the Visit London app for more information.

Celebrate the capital's Black history year-round at the Black Cultural Archives in Brixton and during Black History Month in London.

Get the scoop on the best things to do in Notting Hill all year round.

When does it take place?

What is the Notting Hill Carnival 2023 line-up?

The line-up for 2023 is yet to be released, but here are some highlights that people enjoyed from the Notting Hill Carnival 2022 line-up:

Where in London is Notting Hill Carnival? 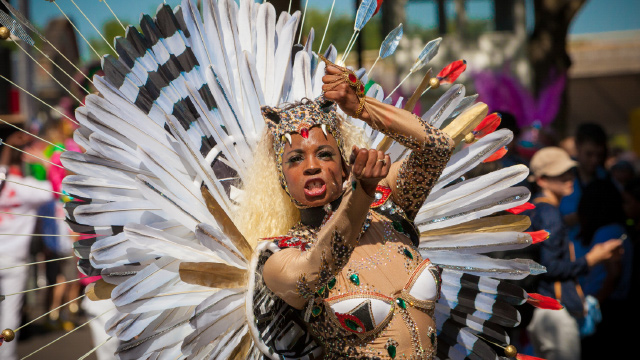 How do I get to the carnival?

As many road closures take place during the festival, public transport is the best way to travel to Notting Hill Carnival in west London.

If you're planning to visit the festival, allow extra time for your journey as a number of local Tube stations close or are subject to disruption. Extra buses are normally put on during the carnival weekend, but these are diverted away from the carnival route.

The nearest Tube stations to Notting Hill Carnival are Bayswater, High Street Kensington, Paddington, Queen’s Park and Shepherd’s Bush, but some are exit-only across the weekend. Check the Transport for London website before you travel for the latest Notting Hill Carnival transport information.

What are the top tips for visiting Notting Hill Carnival? Notting Hill Carnival is a very popular and busy event. Take the normal precautions you would when attending any large-scale event, such as arranging a meeting point and time in advance if you're going with a group of friends or family. If it's a hot August weekend, we also recommend you take a reusable bottle of water with you to stay hydrated, wear a hat and put on sunscreen.

Most importantly, get into the carnival spirit! Join in with the dancing, check out the many sound systems, feast on Caribbean food and continue the festivities at one of the many afterparties.