Korean food in London ranges from the traditional to trendy, whether Korean fried chicken, Insta-worthy snacks, traditional noodle dishes, or Korean BBQ that’s often cooked by diners at their tables.

Enjoy this unique style of Asian food at the London Korean restaurants below. 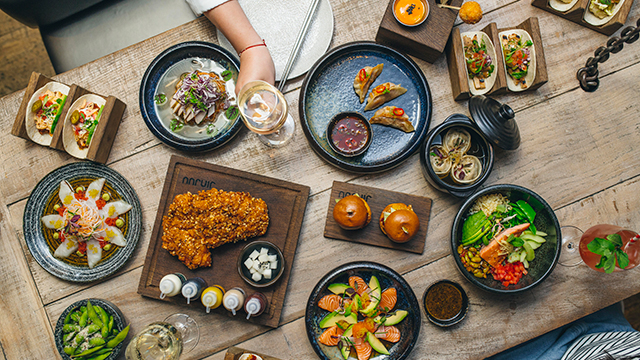 Insta-famous for its picture-pretty corndogs, Bunsik brings Korean street food to the West End at its Charing Cross Road outpost – which is easy to spot due to the queue. Other dishes include cupbap rice bowls with a choice of toppings, and ddukboki fried rice cakes.

Seductive interiors draw you in to contemporary Korean eatery Kimchee, in King’s Cross. Enjoy authentic dishes prepared in the open kitchen and chargrilled meats from the charcoal grill. The small but varied menu features classics such as bibimbap, hot pot and fluffy buns.

If you hadn’t already guessed by the name, Bibimbap in Soho specialises in one of Korea’s most famous dishes: bibimbap. Take your pick from various toppings, from spicy pork to tofu and mixed mushrooms with tongue-tingling accompaniments. Other Korean specialiites such as noodles and soups are also worth a try.

Can’t decide between a meal at a Japanese or Korean restaurant? Have both at Dotori. This Finsbury Park favourite has a set menu full of classics from both cuisines or opt for individual dishes or snacks. Korean specialities here include stews, fried rice with kimchi and a range of bibimbap options.

Carnaby hotspot Jinjuu draws in the crowds with its weekend bottomless brunches, cocktails full of Asian flavours, and modern fusion cuisine: think tacos, sliders and Carnita Fries loaded with Korean ingredients. Sharing platters are perfect to enjoy with friends, while kids are catered for with their own special menu.

Historically home to many Korean immigrants, the south-west London suburb of New Malden has numerous Korean restaurants to this day. Imone stands out – not just for its bright yellow exterior, but also its home-style comfort food. Come at lunch for great value set menus or dinner for à la carte options.

Let your taste buds be tantalised by the variety of dishes on offer at Olle, in the heart of the West End. The food here is inspired by the island of Jeju in South Korea, with stews, pancakes, hot pot, rice, and noodle dishes on the menu. But it’s BBQ that takes centre stage – and if you’re feeling flush, splash out on some wagyu beef.

Let the smell of BBQ lead you to Koba, which has been serving Fitzrovia locals for more than 15 years. Grab a spot and cook meat, prawns, and vegetables to your liking on the table grill. If you’d rather not trust your own cooking skills, order other specialities such as bibimbap rice bowls or bulgogi casserole.

Family-run Jin Go Gae is headed up by Chef Cho, who uses secret recipes and time-honoured techniques to recreate food from his homeland. Expand your knowledge with lesser-known dishes, test Korean classics, or opt for the main attraction BBQ: everything from mushrooms to seafood is put on the grill here.

New Malden hasn’t missed out on the Korean fried chicken craze. Chick and Beers’ halal chicken wings come either crispy or glazed with a choice of sticky sauces, and in different cuts, from wings to breast and nuggets. The perfect pairing with a cold beer, as the name suggests.

The owners’ devotion to wings is left in no doubt with this popular hangout's name. Wing Wing's restaurants in the West End, Bloomsbury and Hammersmith are known for their signature wings and drumsticks paired with beers – giving a nod to traditional drinking and dining “chimaek” eateries in Korea.

Get your Korean street food fix at On the Bab, which has outposts at Covent Garden, Soho, St Paul’s and Shoreditch. Bao buns, rice bowls and fried chicken dominate, with zingy sides for a little extra. The Yangum fried chicken comes in 12, 24 or 36-piece sets – ideal for friends and family sharing – and with a choice of up to four flavour coatings.