You are here: Home > Things to do > Areas > Greenwich > Greenwich film and TV locations
The iconic architecture and surroundings of Greenwich features in many Hollywood movies and hit TV shows.

Greenwich is top choice for many film and TV locations because of its distinct skyline, beautiful riverside setting, stunning historic architecture and ties to trade by sea.

Explore some of the most iconic Greenwich film and TV locations, including the Queen’s House, Eltham Palace and Gardens, Ranger’s House and Cutty Sark, and follow in the footsteps of the stars of the screen. In Thor: Dark World, the colonnades and domes of the Upper and Lower Ground Square make the perfect backdrop for the climactic battle scene between Thor and the Dark Elf Malekith.

The iconic character played by Emma Stone finds herself in Greenwich several times throughout the blockbuster hit.

One of the most notable Greenwich film locations is the King William Lawn fountain, which doubles as Regent’s Park, where Cruella meets her troublesome friends.

The dome of the Painted Hall was also decorated with graffiti for one extreme fashion show, as was College Way. 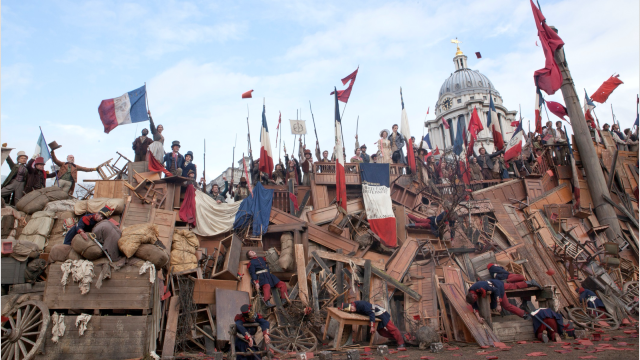 Wander over to the stunning Queen Mary Colonnades where Inspector Javert, played by Russell Crowe, chases after Hugh Jackman’s Valjean in Les Misérables.

College Way and the Lower Grand Square were made into the Parisian backdrop for Do You Hear the People Sing?, as well as the battle scene that followed, and a replica of the Elephant of Bastille was built to help transform Greenwich into 1800s Paris.

Pirates of the Caribbean: On Stranger Tides 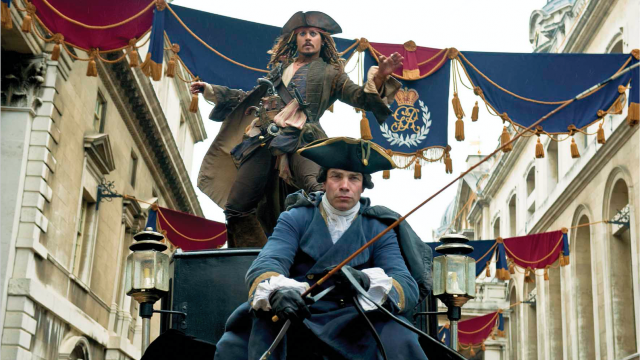 Head to the Old Royal Naval College to see where Pirates of the Caribbean: On Stranger Tides was filmed.

Just some of the sights that made it into the film include College Way, Queen Anne Courtyard and the Painted Hall, which was dressed as St James’s Palace for Johnny Depp’s run in with George II.

Thankfully, the part where Jack Sparrow causes irreparable damage to the building was filmed at Pinewood Studios!

The Old Royal Naval College has played a starring role in many other blockbuster films. It was used to depict wartime London in the Darkest Hour and the Russian Museum of Art in James Bond’s Octopussy.

You can spot royalty strolling through the venue in The King’s Speech as it doubled as Buckingham Palace. Plus, this dreamy location also features in The Dark Knight Rises – where the Greenwich attraction stood in for a cafe in Florence. 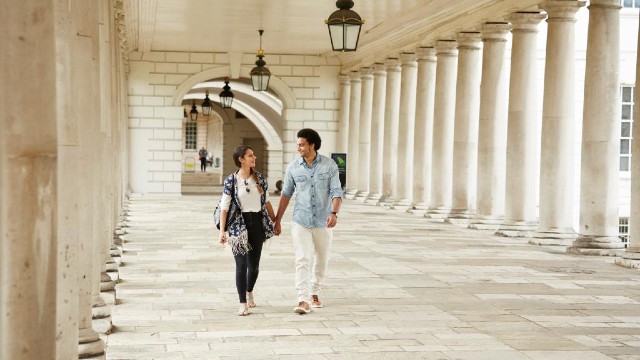 Sherlock Holmes: A Game of Shadows

Below Queen’s House, the arched carriageway was transformed into a Victorian market for Sherlock Holmes’ opening fight scene.

The dramatic scene sees the heroic Holmes chained up and beaten, before correctly predicting the attackers’ next moves to outwit and overpower them in Sherlock Holmes: A Game of Shadows. 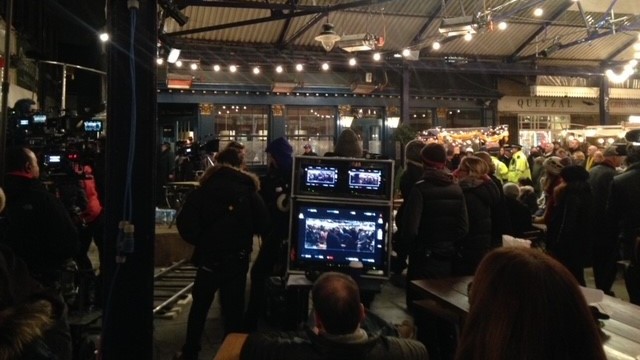 Be thrilled at Greenwich Market as bystanders were by Jack Wilder’s card trick outside The Coach & Horses in Now You See Me 2.

The market is not the only magical London film location in Greenwich, as other notable scenes were also shot in the area, including at Cutty Sark and the Old Royal Naval College. Head over to the medieval and 19th century fusion, Eltham Palace and Gardens, which is one of the Greenwich film locations that starred in the 2018 comedy-drama, Stan & Ollie.

The grand Entrance Hall doubles as Fox Studios for Stan and Joe Schenk’s meeting about future working arrangements, and the comedy duo’s Hollywood dressing room scenes were also filmed inside.

Follow in the footsteps of film stars at Eltham Palace and Gardens. Just some of the other movies filmed at this Greenwich spot include Bright Young Things, Revolver and Brideshead Revisited, where it plays the role of an ocean liner.

Plus, you can catch the stunning art-deco interiors in Misbehavior, as the mansion home of Bob Hope. 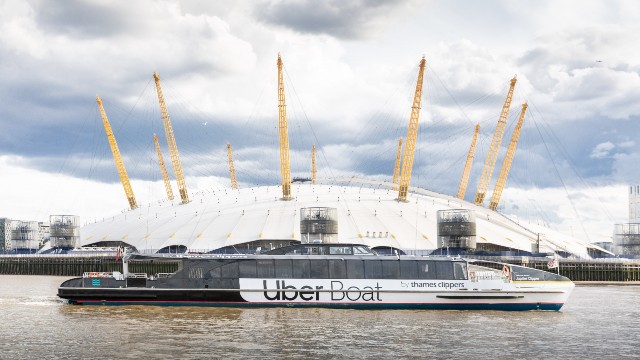 Journey around Greenwich like 007 the James Bond movies, including The World is Not Enough and Skyfall.

The World is Not Enough sees Pierce Brosnan hurtling across the river Thames, before crashing into the Millennium Dome. Today, you can follow in the footsteps of Bond and climb over the roof with Up at The O2.

Alternatively, play Bond by speeding down the Thames from or to Greenwich with Uber Boat by Thames Clippers. The regular service from Greenwich Pier whizzes you along the river in style befitting 007 and the famous boat chase scene in Spectre.

Travel to Greenwich by river and spot famous Thames locations from the Harry Potter and the Half Blood Prince, where Death Eaters destroy the Millennium Bridge and wreak havoc to the lives of Londoners.

You can catch more spectacular views of London and the Thames in Harry Potter and the Order of the Phoenix, as Harry flies with his friends over the river (and almost into a boat)!

Pass the location of the dramatic moment British fashion icon Kate Moss is pushed into Thames and sets the Absolutely Fabulous: The Movie into motion, as you travel to Greenwich by boat. The whirlwind event causes Edina and Patsy to flee to France to escape the media frenzy that follows.

The river Thames also makes an appearance in an array of other hit films, and one of the best ways to get a glimpse of these filming locations is by travelling with Uber Boat by Thames Clippers.

See if you can spot the location where David Tennant’s Sir Piers Pomfrey emerges from the Thames after his boat is destroyed in St Trinian’s 2: The Legend of Fritton’s Gold, or journey along the Thames like Shakespeare as he rushes across the river in pursuit of his love in Shakespeare in Love. 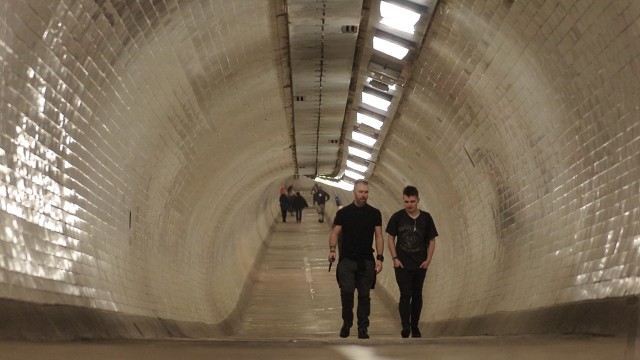 Explore the Greenwich Foot Tunnel, which has linked Greenwich to the rest of London via the river Thames since 1902.

In 2007, the popular tunnel featured in 28 Weeks Later, in a dramatic scene that took two days to film, which sees Doyle abandon his orders to escape and find safety. 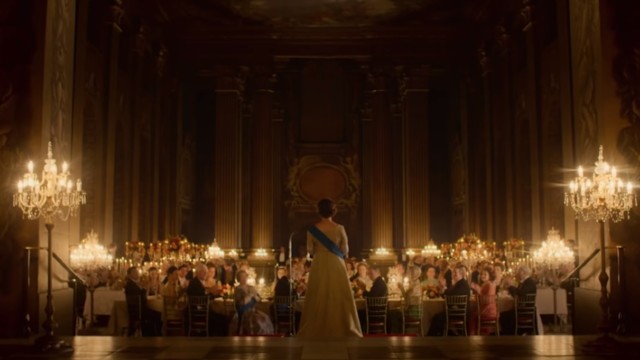 Netflix’s The Crown has been filming at the Old Royal Naval College since 2016. The regal location is used to recreate Buckingham Palace, with a portico added to the Queen Anne Court to make it appear more like the Mews entrance to the Queen’s home.

Other locations you’ll spot include the Painted Hall and the Chapel of St Peter and St Paul. 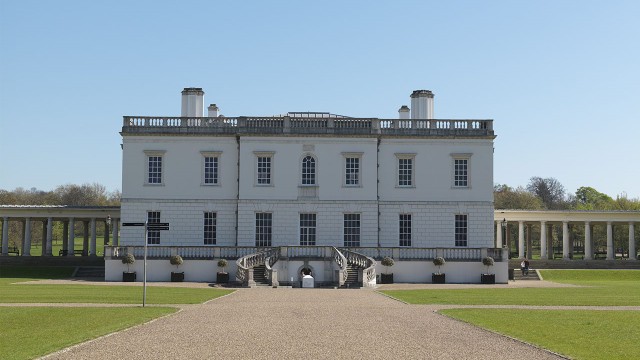 The aptly named Queen’s House has featured many times throughout season one of Bridgerton. You can catch the front façade which acts as the exterior of Somerset House, the location of the grand ball that Prince Friedrich of Prussia attends. Notice the sweeping spiral staircase of Queen’s House, as Princess Diana runs through the palace and down the Tulip Stairs in The Crown. This original Queen’s House feature makes for a beautifully Instagrammable spot in the present day. Venture behind the heavy iron gates of Ranger’s House, which is used as the Bridgertons’ home in the historical romance Bridgerton.

The Greenwich residence was designed in 1723 for admiralty to enjoy the benefits of the city without being in the heart of it.

The Ranger’s House exterior isn’t the only work of art, as inside reveals a world-class collection of more than 700 pieces of artwork, including jewellery and paintings. From 1 April 2022, Ranger’s House will reopen to visitors.

Take a trip to Eltham Palace, which has made several appearances in The Crown. The historical building is used as an international backdrop, as it plays the role of the Bermuda Government House, the HMS Queen Mary and the Queen’s Quarters of the Royal Yacht.

Waltz over to the Entrance Hall, which is flooded in light from the glass dome ceiling, where Norman Hartnell is introduced to the Queen.