You are here: Home > Things to do > Street art
From Banksy pieces to works by undiscovered artists, step outdoors to appreciate London's urban art.

Street art can be found almost everywhere in London, and it’s free for everyone to enjoy. Discover contemporary sculpture, abstract art, modern murals and quirky installations dotted across the capital.

London has one of the biggest and best collections of uncommissioned street art in the world. Local and international artists have decorated the streets of London with a staggering array of creative works, from miniature bronze statues to painted murals several storeys high.

One of the most famous street artists to date is the anonymous Banksy, whose distinctive stencil artwork has regularly appeared in London for more than a decade. Some of his art makes a hard-hitting political point, while other works of his are extremely funny; often they are both. Due to his popularity, or unpopularity in some cases, many of the original Banksy pieces are no longer visible in London.

You can also hunt for unique pieces of street art around north London, search for colourful artworks in Camden or admire the super-cool graffiti-filled Leake Street Tunnel near Waterloo Station – a hidden gem for street-art lovers.

In Soho, look out for the Seven Noses of Soho by Rick Buckley, which are hidden around the area. Then head over to Covent Garden, where you can also search for Tim Fishlock's little-known ear sculptures. 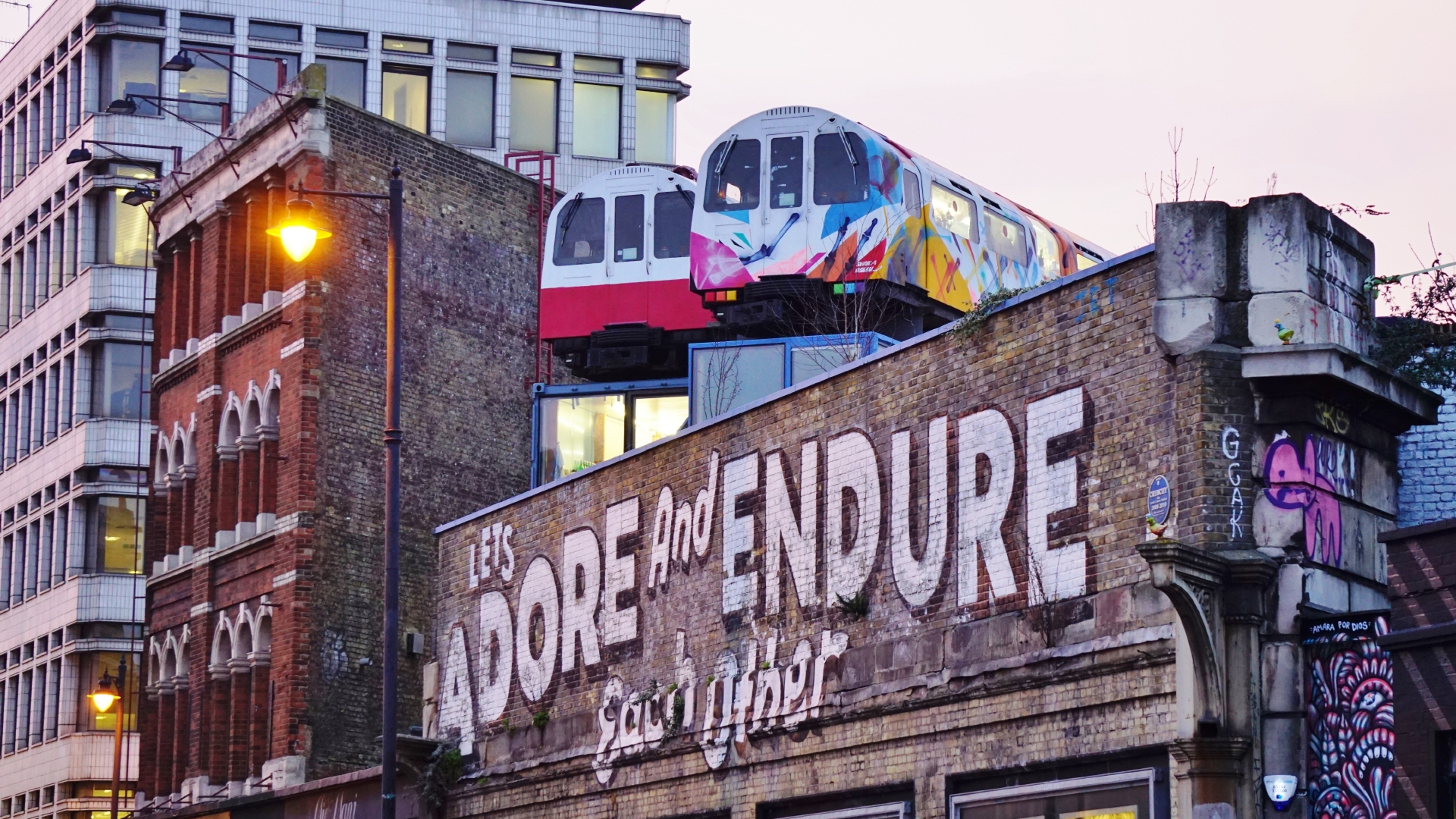 One of the best areas in London for street art is Shoreditch, where the works change almost daily.

Join a Shoreditch Street Art Tour to discover pieces by many of the best graffiti and stencil artists in the world, or combine your love of street art with east London food on an Eating London Tour.

This vibrant part of east London is an ever-changing canvas for street art, filled with spectacular graffiti art, magnificent murals, painted shutters, cool stickers and many more kinds of urban art in London:

Head to Croydon to see some of the capital’s best street artists and public art.

Discover how RISEgallery supports London’s street art scene, encouraging top artists to fill Croydon with their work. This gallery, which has hosted work by big names such as Andy Warhol, Damien Hirst and Banksy, runs The Arts Quarter project, which works with artists and landowners to locate public areas where street art can be showcased: You can also find moving examples of memorial street art throughout the capital, pieces that pay tribute to some of London’s greatest music artists:

Public art is also free for visitors to view, but unlike street art, it has been officially commissioned and installed.

Take a stroll along the river Thames at night and see London's iconic bridges glow as part of the Illuminated River installation. Designed by Leo Villareal and Lifschutz Davidson Sandilands, the public art trail uses LED technology to bathe bridges in stunning light.

For some controversial modern art, check out the Fourth Plinth in Trafalgar Square. There are four plinths near the base of Nelson's Column. The first three have statues of George IV and two generals. The fourth was made in 1841 for a statue of King William IV, but the costs couldn't be met and the plinth was left empty for more than 150 years.

Since 1999, the Fourth Plinth has hosted temporary commissions, including Antony Gormley's One & Other (2009), where members of the public stood on the plinth for one hour at a time. Currently on display is The End by Heather Phillipson.

If you are a sculpture fan, you'll love exploring public art in Canary Wharf. The shops and offices are surrounded by spaces full of statues and greenery. It's a modern area that manages to combine commerce with cultural charm, and often hosts exciting temporary exhibitions and events.

Follow The Line – a self-guided walking tour in east London that links The O2 and Queen Elizabeth Olympic Park – and discover a series of sculptures from artists such as Damien Hirst, Alex Chinneck, Gary Hume and Eduardo Paolozzi. Spitalfields is another area of London with a passion for public art, much of which reflects the history of the area. Kenny Hunter's I Goat stands 3.5 metres high, gazing over Bishops Square, and represents the independence and non-conformity of the local people, while Gillie and Marc’s Dogman and Rabbitgirl with Coffee encourages people to come together and appreciate their diversity.

There are more than 60 artworks across the borough of Lewisham too, from the traditional to witty murals by Artmongers, and popular pieces such as the Catford Cat. See the Lewisham Council website for details of the latest public artworks.

Fifteen of the best street artists to find in London

Here are just a few of the best London street artists who currently have work on display in London:

Stik: One of the most recognisable street artists in the scene. His Past, Present, Future piece in Shoreditch overlooks Old Street roundabout and reflects on the area’s continuing gentrification. @stikstudio

ROA: A Belgian artist who created The Crane, an icon of Brick Lane. His trademark black-and-white animals can be seen around the globe.

Phlegm: A Sheffield-based artist who has a whole world of characters, often on a huge scale. @phlegm_art 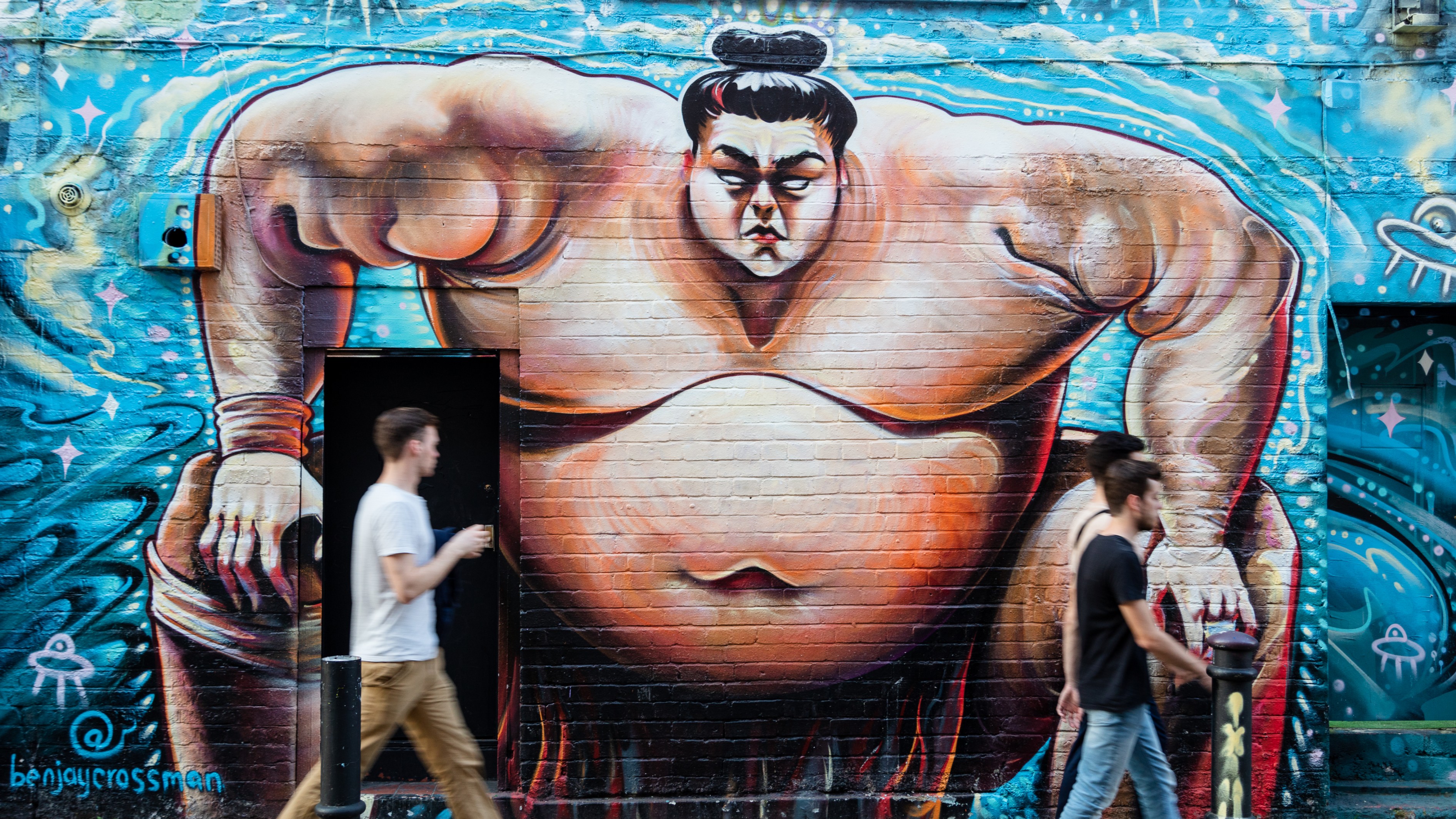 Space Invader: This Parisian mosaic artist is one of the most prolific. His pixelated computer game characters invite "players" to collect points by finding his hidden works. @invaderwashere

Jonesy: His quirky pieces, which sell for thousands of pounds in galleries, sit out of peripheral vision on top of posts around east London, particularly along the canals. @jonesy_street_art

Ben Wilson: This north London pavement artist's work is probably the hardest to find. He turns discarded chewing gum into intricate works of art and has more than 400 pieces on the Millennium Bridge alone.

Fanakapan: Pioneer of Balloon Graff, Fanakapan creates work that looks 3D until you get up close, and often features pop-culture icons such as SpongeBob SquarePants and Sonic the Hedgehog. @fanakapan

Eine: He may be the first living British artist in history to have his work hung in the White House, after former prime minister David Cameron presented one of his pieces to President Obama. @einesigns

Jimmy C: Painter of striking artworks and the iconic David Bowie mural, this Australian artist makes vibrant street art that can be found in London and around the world. @akajimmyc