You are here: Home > Things to do > Sightseeing > Tourist attractions > Statues and fountains
Discover iconic London statues, magnificent monuments, and delightful fountains as you explore the capital.

Journey through history as you learn the fascinating stories behind the London’s monuments, statues and fountains. 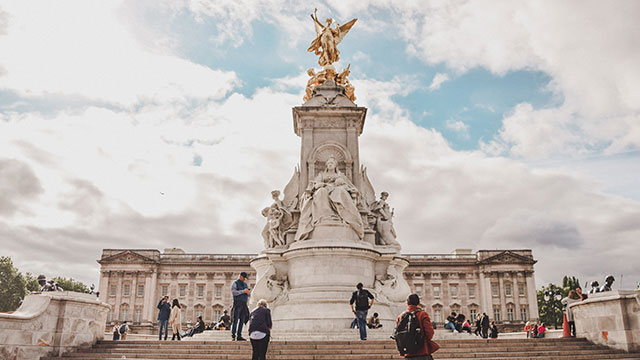 Marvel at the marble Victoria Memorial and Memorial Gardens in front of Buckingham Palace. Designed by Sir Thomas Brock to commemorate the death of Queen Victoria in 1901, the imposing monument is 25 metres high (86 ft) and features statues representing truth, courage, victory, charity, constancy and motherhood. Catch a glimpse before visiting the palace during its summer opening or when watching Changing the Guard.

Gaze up at Nelson’s Column in Trafalgar Square, one of the greatest London monuments. Standing 52 metres (169 ft) high and looking towards Whitehall and the Houses of Parliament, the iconic monument has been watching over London since 1805 and honours naval hero Admiral Horatio Nelson’s victory at the Battle of Trafalgar.

Pay your respects at The Cenotaph in Whitehall, Westminster, a poignant memorial to all those who died in wars and other conflicts. Designed by Sir Edwin Lutyens in 1919, the sombre stone memorial is the focus point for the national Remembrance Day ceremony in November, where wreaths are laid to commemorate those who have fallen. 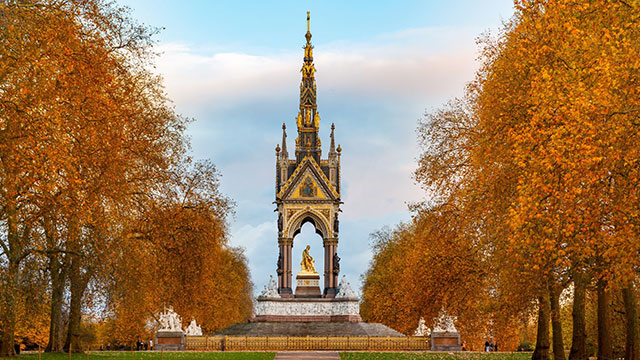 Be awestruck by the Albert Memorial in Kensington Gardens, which honours Queen Victoria’s husband, Prince Albert. Containing a gilt bronze sculpture of the Prince Consort, the bejewelled structure opposite the Royal Albert Hall is one of the must-see London monuments and was designed by George Gilbert Scott after Albert’s death from typhoid in 1861.

5. The Monument to the Great Fire of London

Look up to the sky between Fish Street Hill and Monument Street and you can see The Monument to the Great Fire of London of 1666. Climb the 311 spiral steps for views of the city from near the top of the 62 metre-high (202 ft) column, which was designed by Sir Christopher Wren and Dr Robert Hooke. St. Paul’s Cathedral, The Shard and Tower of London are also within walking distance.

Feel as though you’re in Egypt as you approach the obelisk known as Cleopatra’s Needle on the Embankment, near the Golden Jubilee Bridges. Made in Egypt in 1450 BC for Pharaoh Thutmose III, it was brought to London from Alexandria, the royal city of Cleopatra. Arriving in London in 1878, it survived a treacherous sea journey and later bombing in the Second World War.

Wellington Arch stands between Hyde Park and Green Park. It was built as a victory arch proclaiming Wellington's defeat over Napoleon. It was constructed between 1826 and 1830 but moved to its current location in 1882/83 and offers panoramic views over London from its balconies.

Beat the heat as you dip your feet in the famous fountains of Trafalgar Square during the summer. Designed by Sir Edwin Lutyens in 1935 and featuring dolphins, mermaids and tritons, the fountains come alive with colourful lights as the sun sets. Don’t miss world-famous artworks at the National Gallery while there. 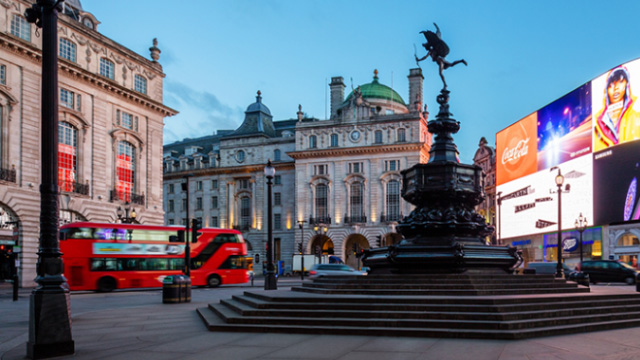 Fall in love with Anteros, brother of Eros, at The Shaftesbury Memorial Fountain, which honours the work of Lord Shaftesbury during the Victorian era. The fountain and its iconic archer by artist Alfred Gilbert, is a well-loved feature in Piccadilly. Stop off for selfies before shopping in nearby Regent Street and St James’s.

Dash in and splash about at “The Water Labyrinth” fountains at Stratford’s Queen Elizabeth Olympic Park. Open during the summer, these fountains include 195 choreographed jets that rise in unpredictable sequences – the perfect cooling-off activity after whizzing down the ArcelorMittal Orbit slide.

Find a spot to relax as you watch droplets of water dance at the Triton Fountain, opposite Jubilee Gates in the Regent’s Park. Admire the bronze sculptures portraying sea god Triton blowing on a conch shell with two mermaids at his feet, before seeing more famous faces at Madame Tussauds London nearby. 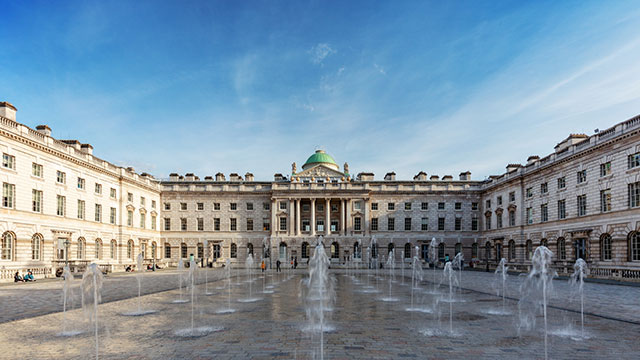 Step into the spectacular oasis of Somerset House, home to the iconic Edmond J. Safra Fountain Court. Admire the 18th-century architecture, as you watch these impressive London fountains dance in front of a neoclassical backdrop. You’re just a few steps away from bustling Covent Garden and the Strand, home to many of London’s top musicals and restaurants.

13. Girl with a Dolphin fountain

Admire spectacular views of the river Thames at the Girl with a Dolphin fountain near St Katharine Docks – the perfect location to snap a scenic selfie. The London fountain’s cascading waters bring the girl and her curious dolphin to life near to Tower Bridge and the Tower of London.

Relax and reflect in the Princess Diana Memorial Fountain, a special memorial dedicated to Diana, Princess of Wales that was designed to express Diana's spirit and love of children. Perfect for a hot summer’s day, the mesmerising fountain in Hyde Park is in walking distance to the Serpentine Lake and Serpentine Galleries.

15. Hylas and the Nymph fountain

Enter St. Johns Lodge Garden at Regent’s Park to admire Hylas and the Nymph, a Grade II-listed bronze statue in the tranquil stone-rimmed pond. Designed by Henry Pegram, it was donated by the Royal Academy of Arts in 1933 and depicts the Greek myth of Hylas, who was kidnapped by the nymph of spring and never to be seen again. Make a day of it with a visit to nearby ZSL London Zoo. Take some time out by the Venus Fountain in Sloane Square between browsing the shops, eateries and nightspots in glamourous Chelsea. Admire the life-size bronze unveiled by Sir Charles Maufe in October 1953, which depicts Venus – the goddess of beauty and love – holding a vase and pouring water from a conch shell. It’s an ideal spot for a first date or somwehere to propose.

Refresh yourself with a stunning view at the More London fountains on the south bank of the river Thames, near London Bridge. Bathe in 200 jets of water with the scenic backdrop of City Hall and Tower Bridge and discover nearby attractions such as The View from The Shard and The London Bridge Experience.

Cool off and have fun with the kids in the playful fountains at Granary Square, in King’s Cross. Splash about as 1,080 choreographed fountain jets dance around before turning into a spectacular illuminated light show as the evening arrives. You can even use your smart phone to control the jets – a first for London fountains!

Gaze at the Glass Fountain outside the Guildhall, one of the first pieces of contemporary art to be erected in the city in 1969. Take a moment to enjoy this unique London fountain made with shards of green glass with water cascading into a black slate-lined pond. Discover more fascinating artworks at the Guildhall Art Gallery and Roman Amphitheatre nearby. 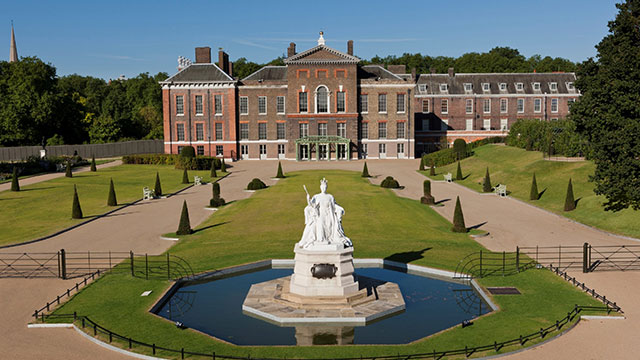 Wander Kensington Palace’s charming gardens, where you’ll find a stunning marble statue of Queen Victoria, who was born in the palace. Designed by Victoria’s daughter Princess Louise, Duchess of Argyll, in 1893, the elegant statue of the monarch in her coronation robes welcomes visitors to the palace.

21. Scenes in the Square

See statues of screen stars come to life at Scenes in the Square. From Harry Potter and Bugs Bunny to Batman and Mr. Bean, follow the interactive trail that celebrates Britain’s love for film. Take a selfie with the iconic London statues, as you explore Leicester Square, with shows, musicals, and entertainment at every turn. You’ll also find a statue of William Shakespeare, a centrepiece of Leicester Square Gardens since 1874.

Play detective to find the bronze statue of Sherlock Holmes by the sculptor John Doubleday. Here’s a clue, venture near Baker Street Tube station to spot the two-metre high (10ft) statue complete with deerstalker and cape. Investigate further at the Sherlock Holmes Museum or join a Sherlock Holmes walking tour of London.

23. The Four Lions at Trafalgar Square 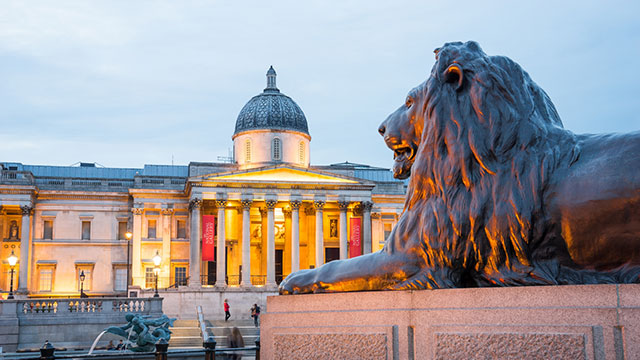 Admire the magnificent four bronze lions that guard Nelson’s Column and Trafalgar Square, which is host to many London events throughout the year. Roaring their way into Trafalgar Square in 1867, Sir Edward Landseer’s much-loved lions attract the imagination of all who meet them.

Spot Kensington Garden’s famous fictional resident Peter Pan, as you explore the charming gardens at Kensington Palace. A favourite feature of the gardens, the bronze statue can be magically brought to life with a smartphone as part of Talking Statues. Local resident and Peter Pan creator JM Barrie was inspired by Kensington Gardens and commissioned Sir George Frampton to build the statue in 1912.

Reunite with loved ones at The Meeting Place, portrayed by nine-metre high (30 ft) bronze statues embracing in the Eurostar terminal at St. Pancras International station. Like a scene from the film Love Actually, the larger-than-life London statues by British artist Paul Day welcome visitors to the city while capturing the romance of train travel – while there, visit some key Harry Potter spots. 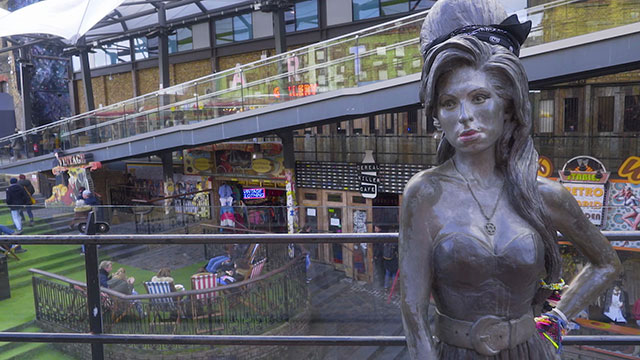 Wander the vibrant Stables Market in Camden, where you’ll find a bronze statue of legendary singer and Camden local Amy Winehouse among the crowds. The life-size statue sculpted by Scott Eaton was unveiled in 2014 – three years after the singer's death – and captures her trademark style and iconic beehive hairdo.

Visit the tranquil Sunken Gardens at Kensington Palace and gaze at the newest statue of Diana, Princess of Wales. Commissioned by Princes William and Harry and unveiled as a memorial to Diana on what would’ve been her 60th birthday, the statue shows Diana surrounded by three children. It can be viewed from Cradle Walk on Wednesdays to Sundays.

Get your bearings near the Paddington Basin and you’ll discover a statue of much-loved Paddington Bear and his creator Michael Bond OBE. The popular pair were chosen by the public in 2013 for their contribution to the life of the community – they’re joined by statues of other famous locals, codebreaker Alan Turing and nurse Mary Seacole. You can also spot a life-size bronze statue of the famous bear in Paddington station.

Admire “the Lady with the Lamp” Florence Nightingale (1820–1910), who was famous for her life-saving hospital work, contributions to public health and the nursing practice. The iconic bronze statue at Waterloo Place, St. James, was designed by Sir Arthur George Walker and was put up in 1915 after being funded by the public.