You are here: Home > Things to do > Sightseeing > Stonehenge tours
Take a tour from London to Stonehenge and explore an area that has fascinated millions for generations.

See iconic Stonehenge and feel its power on a day trip from London. Discover the mystery of the pre-historic monument as you learn about the many theories explaining its origins and purpose.

Why should I visit Stonehenge?

Shrouded in mystery, no-one knows whether Stonehenge was a temple for sun worship, a healing centre, a burial site or a huge calendar. Walk around the stones and see if you can decide for yourself.

Where is Stonehenge and how can I get there from London?

Stonehenge is located in the English county of Wiltshire, about 90 miles (145km) west of London. You can travel there in around two hours by road, or an hour and a half by train (followed by a bus from Salisbury station to the Stonehenge site). The easiest way to take a day trip from London to Stonehenge is by coach tour.

Book tickets for Stonehenge in advance to guarantee entry.

You can buy tickets just for Stonehenge; for a half-day tour with return transport; or for a variety of coach trips which include Stonehenge.

Combine your trip to Stonehenge with an excursion to Windsor Castle, which is said to be the Queen’s favourite residence. Discover the castle's rich royal history that reaches back to 1070 when William the Conqueror first built a castle on the site, and explore the lavishly decorated state apartments that feature paintings by Rubens, Van Dyck and Holbein.

In addition to visiting Stonehenge and Windsor, some tour packages include trips to other iconic sites: trace the footsteps of famous students that have graced Oxford University, admire one of England’s finest Gothic cathedrals at Salisbury, or take a stroll around the picture-perfect village of Lacock.

All of these tours go to Windsor: 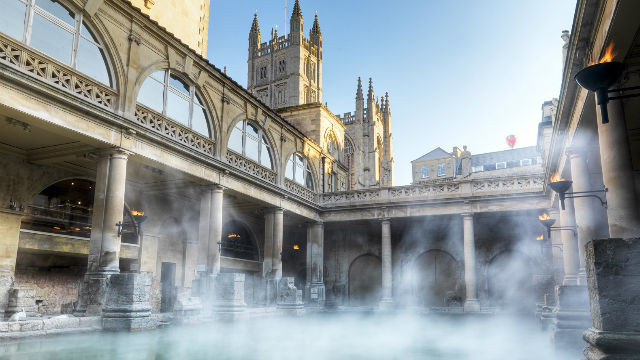 Bath was the first city in England to be designated a UNESCO World Heritage site: discover why on a walking tour of the city that highlights the stunning 15th-century Bath Abbey, beautiful Georgian architecture and the iconic Pulteney Bridge, featured in the film version of Les Misérables.

Some day trips to Stonehenge and Bath include entry to the Roman Baths, where you can view the incredible remains of one of the greatest spas of the ancient world, centred around Britain’s only hot spring.

All of these tours give you plenty of time to explore the city of Bath:

See all Stonehenge tickets and tours

Find more fantastic day trips from London, or take a look at the best sightseeing tours in the capital.