You are here: Home > Traveller information > Local trains in London
Use London's train network to travel across the city and beyond the Tube.

London's rail services crisscross the city and extend beyond the Tube network. Local train lines, which include the London Overground, National Rail services and the Elizabeth line, connect with the Tube network, and most routes accept payment by Visitor Oyster card*, Oyster card, Travelcard and contactless payment card.

London Overground is a network of routes in suburban London, with a few stations in Zone 1 as well as to Watford in Hertfordshire. A number of Overground stations have interchanges with the London Underground.

Similar to the Tube, the London Overground Night Service is in operation on one line for 24 hours on Friday and Saturday nights.

To plan your journey on the London Overground, use a free London travel map or check the Transport for London website.

Check the National Rail website for detailed information about train routes in London, timetables and fares.

The main rail operators connecting the city centre to Greater London and beyond are:

The National Rail network also connects London to the rest of the UK by train. 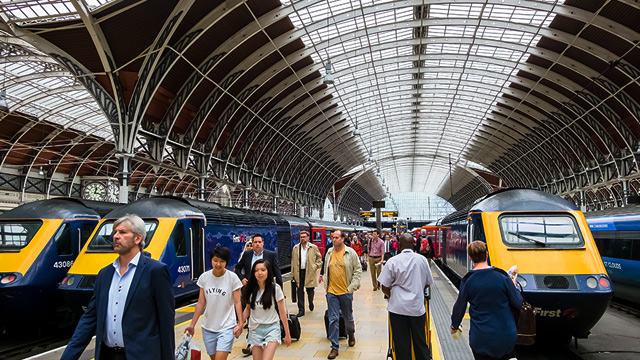 The Elizabeth line links Heathrow airport and Reading through central London to Shenfield and Abbey Wood. Before the Elizabeth line opened, the service linking these areas was known as TfL Rail.

The Elizabeth line connects with London Underground, DLR, National Rail and London Overground services, with some of the major interchanges including Paddington, Farringdon, Liverpool Street and Stratford stations.

Elizabeth line passengers from Heathrow airport can get to central London in about 30 minutes, and to ExCeL London exhibition centre in 50 minutes.

How to pay for train journeys in London

How much the train fare is depends on the time of day (peak or off-peak hours) and which zones you travel through. Touch in on London trains using your Mastercard contactless card

The National Rail website has passenger assistance information, including specific details on accessibility at each train station and how to request assistance.

Train companies can make arrangements for passengers with accessibility requirements, including people who use wheelchairs. Staff can meet you at the station, accompany you to the train and see you safely onboard.

All of the Elizabeth line's stations are accessible with step-free access from street to platform.