Content contains affiliate links – marked with asterisks. If you click through and make a purchase, Visit London receives a commission which is put back into our work promoting London.

London Luton Airport (LTN) is the UK's fifth busiest airport. It's a major base for low-cost airlines and is located 56km (35 miles) north-west of central London.

Arriving and departing from Luton Airport

The Luton Airport arrivals hall has shops, bars, restaurants, a currency exchange and an onward travel centre where you can arrange a car hire or book bus and coach tickets.

The Luton Airport departures lounge has shops, restaurants, bars and a currency exchange.

How to travel by train from Luton Airport to central London

A regular shuttle bus links the airport to Luton Airport Parkway train station in about 10 minutes. You can book your train ticket to include the shuttle or pay when you board.

Trains depart several times an hour during the day, and there are two trains an hour throughout the night. The journey to London from Luton Airport, including the bus transfer, is roughly 45 minutes. 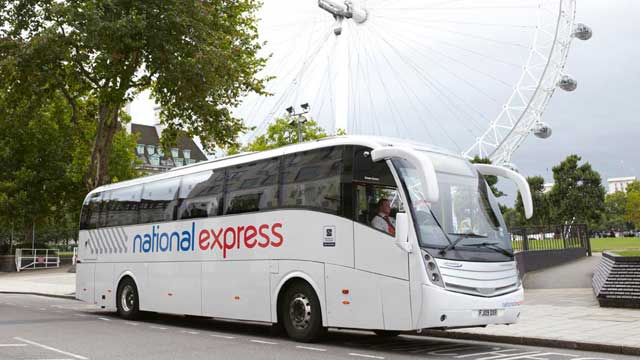 How to travel by coach from Luton Airport to central London

National Express has many daily services on two routes to central London. The journey time is about one hour and 15 minutes.

Taking a taxi from Luton Airport

Taxis queue for customers at London Luton Airport. Enquire with the driver or minicab company beforehand to find out how much your journey will cost. Only use a licensed taxis or a reputable minicab company and never use unauthorised drivers.

Green Line coaches are fully accessible to wheelchairs users. To ensure that an accessible coach is available for your journey, you should call at least 24 hours in advance on 0844 801 7261. Thameslink and East Midlands Railway also provide support for passengers with disabilities, from booking your journey to help getting off and on trains.

Luton Airport has two hotels on site: Holiday Inn Express and Ibis. Many more accommodation options can be found a few kilometres from the terminal.

If you drive and want to leave your car at London Luton, the airport has short-term and long-term car parks.